Originally there was a small church outside the castle, perhaps dedicated to Saint Stefano. In 1605, the Masserini brothers restored and extended the church; they dedicated it to the Madonna della Consolazione and Saint Stefano. In 1612, the brothers donated the church to the monks of the Order of Agostiniani Scalzi, who then built a monastery dedicated to the Madonna della Consolazione in the residential annexe. They named the church in honour of Saint Agostino.
In 1925, modernisation work began that continued until 1930. During those years the actual nave vault was created. During the 1970s, the bell tower was erected using the bricks of the demolished rural Saint Marone church. On the façade there are two square embossed cornices, placed symmetrically to the main door. Above this, a small open oculus can be found which was made in the 1920s. Until 1922, Saint Marone was a “noble parish” and it did not have a defined territorial area. It had jurisdiction over approximately forty families of ancient origin and it was allocated the church of St Giovanni Battista. From 1923, it was made a territorial parish by Archbishop Carlo Castelli and was assigned the eastern part of the area. The families who lived to the right (“levante” – eastern) of the provincial road were assigned to Saint Marone, those who lived on the left to Saint Giovanni Battista. The title of the parish was transferred to the church of St Agostino, which from then on took the name of Saintt Marone.
The church apse has a preserved crucifix originally from the Chiesa della Misericordia or Church of Mercy, made of fig tree wood from the 16th century by an unknown artist, as well as two tablets of the Crivelli school (15th century) which depict the Madonna and Saint Giovanni Evangelista, again from the Chiesa della Misericordia. Above the door of the main entrance, there is a splendid painting of Saint Marone who carries in his hand a book with the ancient castle of Monteleone on the top, with Saint Michele Arcangelo and Saint Martino. Also preserved is a processional cross with little bells, in engraved and embossed molten silver, for preserving sacred relics. This was created by Brother Bartolomeo of Montelparo in 1524, and is originally from the Church of San Giovanni Battista. 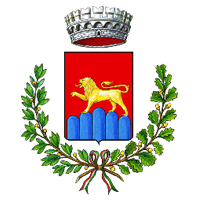